What is the attraction of the town ?

The town of San Terenzo has ancient origins and rests at the extreme western side of the Bay of Lerici just two miles away from Lerici itself. It rises beneath a
promontory which is called Falconara and is overlooked by its medividal castle
on one side and the magnificent park of the Maccarani estate with its pine and oak trees on the other leading the way towards Lerici.

The ancient name of the town is Portiolo, but it later took on the name of San Terenzo, in honour of its patron saint Terenzio, a wealthy pilgrim who came from Scotland and settled on the coast of the bay. The first historic writings date back to 1224, the period in which the town was part of the Trebiano township. It originated as a fishermen's village and during its medieval times, the town was known as an important gathering place which welcomed pilgrims passing through.


The Best Things to Visit ?

Nowadays, San Terenzo offers its visitors just the right mix of beautiful turquoise sea, a wide stretch of beach, lush green hills and the magic of the unmistakable multi-colored Ligurian tower-houses. Its beauty and charm is also well celebrated by the many poets like Shelley and Byron, and intellectuals that took refuge and lived in the area.

Coming down Via Garibaldi from SP331 road, you will end up right into centre of town and the main promenade that stretches across the coast revealing the lovely view of the Bay of Lerici.

On the right-hand side, where Via Garibaldi meets the main promenade Via Matteotti (see the town's map below), you will find Piazza Brusacà.

Piazza Brusacà leading to the Castle 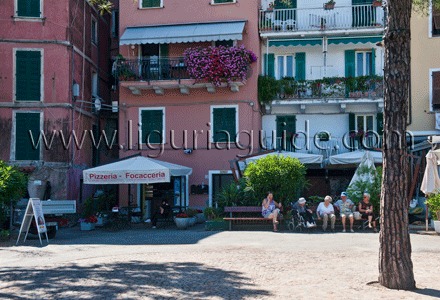 The Piazza hosts our favourite ice cream shop 'La Rana Golosa' and seafood restaurant 'La Griglia' as well as the steps leading to the entrance of its medividal castle .

Piazza Brusacà, you cannot resist the icecream of 'La Rana Golosa' even on a cold day...

Nowadays the Castle hosts numerous art exhibits and various other cultural events, which certainly liven up the town' summers. It also affords great panoramic views over the town and the bay.


Beneath the walls of the castle and towards the west, there lies a very evocative promenade, which also supports the fortress and ends in a little beach called "Marinella" with crystal clear water. This small beach is perhaps less equipped as compared to the mean beach in San Terenzo but nevertheless more charming.

Golfo dei Poeti, view from the promenade behind the Castle


The same promenade also represents the actual "from castle to castle walk" which will lead you from Piazza Brusacà along the town all the way to the Castle of Lerici at the other end of this wide bay.

Right across Piazza Brusacà stretching to the east is the main beach of  the town . It goes right along the promenade and is made up of a "free" section as well as a section which is free but also equipped. Here you can rent deckchairs, beds, beach umbrellas, canoes and little rowboats, while the children can easily be entertained in the play area built on the beach for them.

The main promenade offers variety of artisan shops to buy souvenirs, local produce and beach necessities. You will also find a couple of pharmacies , buss stops and cash/ATM points along the way as well as lots of local bars and restaurants where you can taste the local specialities.

The walk along the promenade


Walking along the promenade, at the corner of Viale della Vittoria, you will find the Church of Santa Maria Assunta dell'Arena (Madona dell'Arena) dedicated to the nativity of the Virgin Mary. The church was built around the 1600's on top of the remains of an even more antique one and between 1740 and 1922 its building has been through several reconstructions. The most obvious one was the shifting of the bell tower from the façade to the side of the church.


The statues from the façade, made from Carrara marble, have been recently restored, and were not originally located in these spots. The inside of the church is decorated by Baroque style stucco work dating back to the latter half of the 1800's which is characterized by a transetto and side chapels.

Inside of the Church of Santa Maria Assunta dell'Arena (Madona dell'Arena)


The church contains a tablet of the "Madonna dell'Arena" from the fifteenth century and a large painting from the end of the seventeenth century by Paolo Gerolamo Piola, formerly thought to be painted by Domenico Fiasella. There is a marble slab in the apse which depicts in relief the Saints Fabiano, Rocco and Sebastiano (second half of the 16th century).The church is also often used for christenings and wedding events...

The Church of Santa Maria Assunta dell'Arena during a wedding ceremony

The Church of Santa Maria Assunta dell'Arena -
and the happy couple on their way out of the church!

Continuing down the promenade, you will pass by Villa Magni - the white house facing the sea with the arched colonnade. The Magni house originated as part of a monastery of the Barnabite priests, but throughout the centuries changed ownership many times, as it was a sought after residence by noble families.

The villa was also famously the residence of Percy Bysshe Shelley and his wife Mary Shelley, author of the famous novel "Frankenstein" in the 1800s. And nowadays, you will find reminders of the impression the area had on them...


The park of Villa Magni affectionately referred by locals as 'Shelleys Park' is currently used for several local events and also as an outdoor movie venue during the summer months.

Villa Magni - Entrance to its Park


Continuing down the promenade walk from the park of Villa Magni, you will hit the Colombo Beach Club offering every sort of comfort for a day on the beach.


The daily entrance fee to the beach club starts from €12 and includes the use of a deckchair while upgrading to a sunbed will set you back to €14 per day. There are entrance choices to suit everyone such as:

The Venere Azzurra beach follows the Colombo Beach Club along the coast , right outside of town towards Lerici and also has the same facilities as the San Terenzo beach.

If you are driving to the area then we strongly suggest you check out our Parking and Traffic restrictions section . You will also find our  Useful Numbers and Services section helpful in providing essential information on the emergency numbers and other valuable services available in this area of Golfo dei Poeti...