Our Portovenere Travel Guide, is here to help you find :

What is the attraction of the town ?

We find the town at the tip of the promontory that forms the western shore of the Gulf of La Spezia and separates La Spezia and the Cinque Terre , facing the Island of Palmaria across a narrow straight. Once you take a glimpse of its bay and tower-houses rising over the rocky slopes while approaching on the winding road leading to town, you know you are in for a treat… 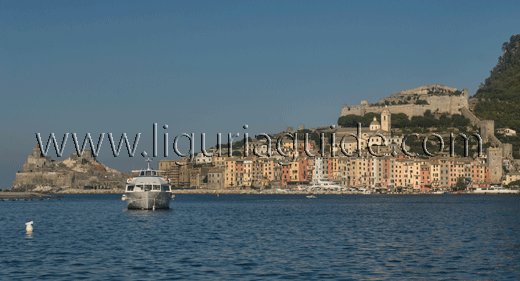 The town has ancient origins and takes its name ( Portus Veneris ) from a temple dedicated to Venus, which was located exactly where the Church of San Pietro now stands. The name was probably chosen because of the fact that, according to the legend, the goddess was born from the foam of the sea , abundant just below that cliff. The town was a Byzantine stronghold in mediaeval times but in 643 AD, was destroyed by King Rotari who had extended the Longobard dominion to maritime Liguria. The town grew again over the next centuries thanks to the monastic movement, which initially occupied the nearby islands of Palmaria and Tino .

Portovenere was conceded by the Da Vezzano family in 1113 to the Genoese, who developed the military and marine potential of the town and built the fortified town as we see it today: the characteristic row of tower-houses along the waterfront, the city walls with its three towers, the town gate, Doria Castle , San Pietro Church in 1256, as a token of gratitude for the decisive contribution of the local inhabitants in the conquest of Lerici and, between 1118 and 1130, the church of San Lorenzo .

The city wall with its towers

With the refinement of the long-range guns began the military decline of the village as it lost its "invulnerability" due to its entrenched position, however Portovenere continued to be an important port in the routes of commercial shipping. Following the arrival of Napoleon in the Gulf of Spezia and the proclamation of the New Ligurian Republic, August 1, 1791 , began another period of oppression for the town under the occupation by Austro - Russian and French armies who severely damaged the two churches. 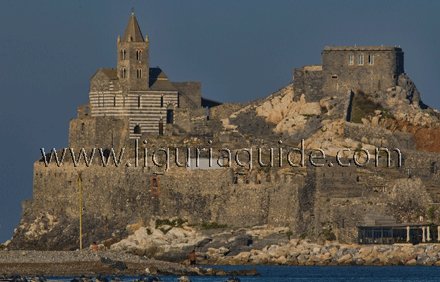 At the end of the nineteenth century began a period of restoration work which continued steadily and has allowed the preservation of " ... an area of exceptional cultural value , which shows the harmonious relationship between man and nature which must be a landscape demonstration of extraordinary scenic beauty of a traditional way of life that has persisted for a thousand years and continues to play an important role in socio-economic life of the community " - the reasons for which Portovenere and its surrounding areas have been included in the UNESCO World Heritage List .

One of the main alleyways of the town


Today, the town, virtually unchanged in the course of eight centuries, has morphed from rough-edged Genoese fortress-village to a seaside resort. It offers its visitors a magical atmosphere filled with history and beauty with its pastel tower-houses and ancient alleyways as well as spectacular, breathtaking views of the western part of the Gulf of La Spezia...

View of the Island of Palmaria from Portovenere's Castle


Things to Visit in Town and Around the Area

“When the sun sets behind the islands of Portovenere,
it converts the sea into a milky surface. The islands
glow as if they were amethysts. The Mediterranean Sea
is simply wonderful."

Following the winding road from Le Grazie, you arrive in Portovenere and join the buzzing atmosphere of Piazza Bastreri.

The shade and view towards the port from piazza Bastreri


At the far end of the piazza you can admire the ancient town’s gate which leads you through the city walls into the narrow carrugio (alleyway called Via G. Capellini) that goes through town.


The alleyways offer endless possibilities to taste and buy local delicatessens the likes of focaccia, fresh basil and fish as well as local souvenirs.


You can make a sharp turn to the right after the town’s gate and start the steep ascend of the stairs leading to the magnificent Doria Castle of Portovenere .

Do remember to stop and turn around from time to time to admire the charming views that open up over the Gulf and the Island of Palmaria .

The path goes through the upper part of the village, passes close to the bell tower of the San Lorenzo Church and opens up onto the shady terrace just below the Castle.

The belltower of San Lorenzo Church as seen from the path


This is an ideal place to take a break and enjoy a picnic while admiring the views over the Bay.

The terrace just below the Castle


Once you are rested you can go up to the Doria Castle and take a tour around its grounds. From this high point, you can see the Island of Palmaria in all its glory as well as splendid panoramic views over the promontory where sits the San Pientro Church and the Byron’s Cave.

From the Castle you can start your descend taking the path on the right which leads to the San Lorenzo Church . The church was erected on the rocky hills at the centre of town and was considered the official cathedral of the colony. And inside it, today we find several great works of art: a 15th –century triptych, the St. Martin Polyptych, as well as the wonderful parchment of the Madonna Bianca (White Madona), for whom Portovenere’s citizens have a sacred admiration.

View of town and San Lorenzo
Church overlooking the town

Continuing your descend through the narrow alleyways, you will start taking glimpses of the beautiful black-and-white Romanesque San Pietro Church which sits atop a buried Roman temple at the peninsula’s extremity.


You will come to Piazza L. Spallanzani, which leads the way to the San Pietro Church as well as the Arpaia Cave, affectionately called Byron’s Cave.


The ubiquitous Lord Byron was a regular here and was captivated by the beauty of the area as was fellow poet Shelley, who drowned while trying to swim here from Lerici.


You can then head down towards the waterfront and admire the pastel tones of the 1000-year-old tower-houses while taking an aperitivo in one of the many welcoming caffee bars and restaurants...


Looking for a place to stay in the area ? Check our charming B&Bs and Book NOW !

Apart from sightseeing around town, the surrounding areas offer a wide variety of activities – swimming, canoeing, windsurfing, hiking, snorkelling, diving and climbing. Much of the territory of the municipality of Portovenere is in fact part of the Regional Natural Park of Portovenere which has an area of around 400ha and includes the hilly cape as well as the islands of Palmaria, Tino and Tinetto.


The itinerary formed by the paths of the Club Alpino Italiano ( Italian Alpine Club) leading to the Cinque Terre – path No.1 starts from Portovenere and affords panoramic views that are among the most charming on the whole Riviera.

The area attracts visitors not only with the variety of beautiful nature trails but also with is amazing diving and climbing spots. The Muzzerone and its cliffs are now one of the most loved and visited by thousands of climbers from Europe and around the world.

The southwestern part of island of Palmaria as well as the islands of Tino and Tinetto are part of the Marine Protected Area of the park and let you enjoy varying scapes of secluded caves and magnificent cliffs overlooking the sea.

The area offers unique diving spots with interesting species of coral, all present at much shallower depths than traditionally found in other places.


The Must Taste Typical Food Specialities

As you would expect the sea, in addition to affording a charming seascape and as is the case with the other villages along the Gulf, has marked the life of Portovenere and its citizens who are considered to be expert fishermen. All local specialities are therefore characterised by products typical of the sea. Visiting the area you cannot but notice the mussle breeding areas off the Island of Palmaria and Portovenere - activity which began at the end of 19th century.

Today Portovenere's mussles are renowned delicacy and are cooked at restaurants in a variety of ways: with spaghetti, fried, stuffed and marinara.

In addition to shellfish, octopus is another speciality of the area and if you have the chance you should try the excellent octopus salad seasoned with local olive oil and aromatic herbs. The octopus is abundant here due to the high concentration of plankton in the waters off the town's shores.


If you are passing through the village of Le Grazie , make sure to try the sea breem which they breed using a well-tried technique.


Interactive Map of the Area

You can zoom in and out, finding the best scale and then print it to .pdf and bring it along on vacation! You definitely won't find a more detailed, up to date map online or on vacation.