The Island of Palmaria is the largest as compared to the Islands of Tino and Tinetto in the Archipelago in the Gulf of La Spezia. It is separated from the promontory of Portovenere by a narrow stretch of sea, called ‘Le Bocche’, merely 105 meters wide.

The Island as seen from Portovenere


The Island is also the most popular and visited of them all, both by tourists and locals, just a short ferry ride from the port of Portovenere. The island is a protected area since 1997, when the Island of Palmaria with Tino and Tinetto , Portovenere and Cinque Terre , have been included in the UNESCO world heritage list . The island attracts its visitors with its variety of hiking trails and natural beauty: untouched beaches, ragged cliffs, clear blue waters, natural vegetation and caves that can only be reached by boat.

The Bay of Portovenere is one of the biggest farms for mussels (called cozze) and the baby mussels bred here ( called le sementi) are also exported to other Italian mussel farms. You cannot fail but see dotted around the Bay, the planted polls and cables in the water on which the mussels live and breed.

The Island can be reached by private boats or ferry services from La Spezia or Portovenere . The ferry service in Portovenere departs from Molo Doria and costs just 4 euros return. There are boats going back and forth every 15 mins but note that the last boat ride from Palmaria is at 7pm.


It takes around 5 minutes to take you across to Palmaria and the boat ride affords a great view point to admire the typical seafront tower-houses in Portovenere. 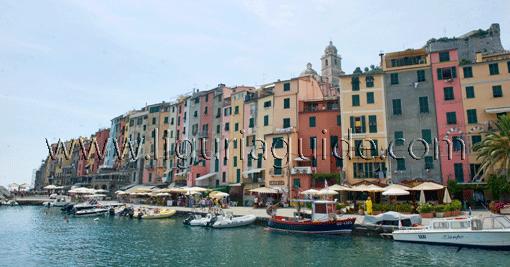 View from the boat of the tower-houses in Portovenere

Check our Virtual Tour of the Island

The ferry docks at Terrizzo from where you can begin exploring the island. To the left is a wide dirt track, via dello Schenello, and to the right is the beginning of the asphalted road, where the B&B-restaurant "Locanda Lorena" is open all year round. Try the different delicious meals of fresh fish and frutti di mare (fruits of the sea). Their fantastic dessert, Torta di pere e cioccolato (pear and chocolate cake with hot chocolate sauce) is to die for.

There is a hiking path you can take to the right of the old vats, indicated by a red sign, which will lead you to the old asphalt road of the island affording spectacular views over the Island of Tino once you reach the top.

The asphalt road is definately an easier hiking path to take as it has a smooth track and steady ascend to the top through the woods of the island.

Check our Virtual Tour of the Island

It winds around the island until it reaches its top and while it is an easier hike you will miss out on some spectacular views that the other hiking paths afford.


As you can gather by now, the Island offers a variety of landscapes and hiking trails - the eastern side is densely covered with Mediterranean scrub, while steep sea cliffs, which reach 188m in height, characterize the western side.

On the western side of the Island of Palmaria, one also finds the spectacular Grotta Azzurra (Blue Cave) which can be reached only by boat, and further to the south, along the peaks populated by colonies of seagulls is the entrance to the Grotta dei Colombi (Cave of Doves) accessible only by coming down with climbing ropes. Reaching the top of Palmaria, near the Grotta dei Colombi you can enjoy
spectacular views over the Island of Tino


Finally, on the southern side, in a small sheltered bay, you can admire the remains of the portoro marble quarries called Pozzale. The small bay with its beach is the second mooring place for the island. In this area, where the landscape gains a magic atmosphere thanks to the smells and colours of the Mediterranean bush, you find the second restaurant on the island - "Il Pozzale" - with full view of the Island of Tino  .

View over Pozzale from one of the hiking trails


Portoro is a precious black marble with golden veins which was quarried here until about 30 years ago. You can still see a slide running down the steep hillside, which was used to carry the portoro down to the sea and load it into boats for transportation to the mainland.

Most of the paths lead to the top of the island and the Semaforo, a military post near the Cavour fortress which is surrounded by cluster-pine trees. To the left of the fort a path descends to Cala Alberto Point and from here it returns to the Terrizzo. An alternative route is to follow the asphalted road and descend towards the sea leading you straight down to the mooring point at the Terrizzo.


Map of the Island

Virtual Tour of the Island


Here's where we are... Check our virtual tour of the island !