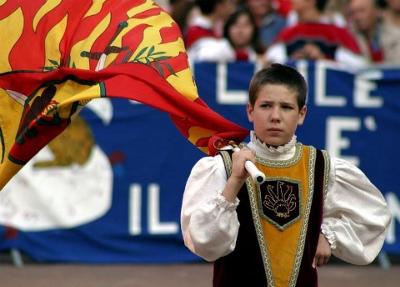 The Palio of Ferrara is the most ancient event of its kind is the world. It was the year 1259, when, to celebrate Azzo the Seventh “Novello D’Este” – the marquis of the city – and his victory over Ezzelino da Romano at Cassano D’Adda (near Milan), the first palio of Ferrara was held.

20 years later, in 1279, this spectacular popular tradition was made on of the City’s institutions. The statutes stated that the Palio be held twice a year: on 23rd April in honour of St. George the patron saint of Ferrara, and on 15th August in honour of the Assumption of the Virgin Mary. The first prize for the winner of the race was in fact a “palio”, or piece of cloth. These “races for the palio” have been immortalised in the frescoes in the “Salone dei Mesi” (Room of the Months) in Palazzo Schifanioa, in the archives of the time and in Ariosto’s “Orlando Furioso”.

Benediction of the Palii and candles are offered • The Ducal Court and the eight districts, in majestic processions composed of musicians, flagwavers, dames, knights, pages and men-at-arms, arrive at the Cathedral for the solemn Blessing of the Palio.

9pm – Corso Ercole I° d'Este - Historical Procession. Piazza Castello · 9.30pm – Registration of the Districts in the Palio games • In the evening, a majestic procession, with more than one thousand three hundred participants, crosses the city and enters the Estense Castle, arriving at the adjacent square where the registration ceremony and the presentation of the champions taking part in the Palio races are held.

Obligatory tests of the horses to the canopies

PALIO RACES • The culminating event of the Palio of Ferrara, where the traditional putto (local dialect for male and female infants), donkey and horse “races” are held.

Return to May 2011 Events on LiguriaGuide.com.