What is the attraction of the town ?

Golfo dei Poeti, Panoramic view of the town and its magnificent castle

Further to the east, we encouter the charming villages of Fiascherino and Tellaro . While looking across the sea, you can see the islands that enclose the western side of the Gulf of La Spezia - Tino, Tinetto and the largest of them all, Palmaria .

View from above Lerici over the Gulf and its islands

The most prominent feature of the town is its magnificent castle , which protects the city and oPiazza Giuseppe Garibaldi, the main square
in townverlooks the bay from the rocky promontory it was raised on.

The town's seafront promenade and its magnificent castle

Visiting the area is never disappointing! It is rich in aristocratic villas , enchanting gardens and charming beaches . No wonder, it was the favourite destination and source of inspiration for the Romantic English poets – from Shelley to Byron and D.H. Lawrence.

The area is rich in stately villas among the charming hills

The climate of Liguria allows this small town to offer a pleasant stay all year around with lots to admire and explore – from the hiking trails among the emerald-green hills that form the typical Lerici landscape ( the municipality is also part of the national Park of Montemarcello) to the suggestive architecture of the area with its rich history.

The typical tower-houses along the seafront

The origins of Lerici can be traced all the way back to the Etruscan times and by the first half of the 12th century the town has transformed itself from a small fishermen village to a strategic seaport. During the Middle Ages, it was often an object of contention between Genoa and Pisa, as it was on their common border. It was while the town was occupied by the Pisans that its castle was built in 1241 and later extended and reinforced by the Genoese as the town came under their control for good in 1479. 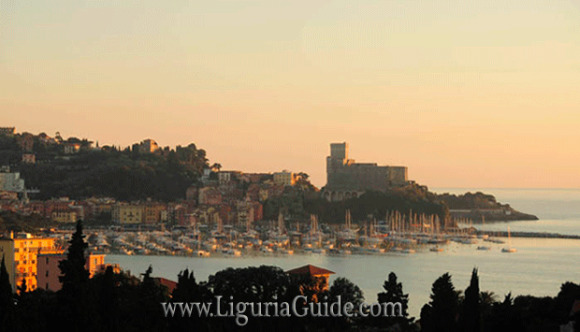 Panoramic view of the town and its Castle

Over time Lerici changed its military focus into an important port for travellers, pilgrims and merchants bound for Rome, northern Europe and Santiago de Compostela. This change resulted in an increasing number of noble families settling into the area and enriching the landscape with austere and stately villas, which can be admired to this day. The town later developed into the charming tourist centre that is today.

Panorama of the town and its port

Visiting the area, you will be offered a good network of hotels of all categories, night life and lots of typical restaurants to choose from. Must-taste typical local dishes are: date-shells à la Lericina soup, actually fish in general, and spaghetti à la Lericina...

Via Roma, leading to the center of town

One of the many charming alleyways to explore around town

Visiting Piazza Giuseppe Garibaldi, it will be impossible to miss the Oratorio di San Rocco. Built in 1287 in honour of Saints Martino and Cristoforo, it was extended around 1523 and dedicated during the plague to San Rocco – patron of the plague victims. Its tower was born as a watchtower but in the XVI century was transformed to a bell tower. The tower served a very similar function as the ‘Laterna di Genova’ and inside it you are still be able to see the emblem of Genoa which marked the port of town.

The Oratory of San Rocco

Another must-see is the Church of San Fransesco D’Assisi which dates back to the end of 1200. It preserves many works from the Genoese school, while in the nearby Oratorio di San Bernardino da Siena, you can admire a precious painting depicting Madonna with child by Domenico Fiasella.

Last but not least on your list of things to visit should be the magnificent Town's Castle . It is considered one of the most beautiful in all of Liguria, a superb example of military architecture.

Nowadays, following an extensive restoration, the castle is also the home to a Museum of Palaeontology - unique in Europe with regard to the scientific findings it offers and the exhibit technology that it uses.

Promenade along the charming seafront of the town

The promenade that winds round the foot of the Castle and along the Vassello seafront also represents the actual "from castle to castle walk" which will lead you along the town all the way to the Castle of San Terenzo at the other end of this wide bay.

The promenade that connect Lerici with San Terenzo


If you are visiting town on a Saturday, you cannot miss the Flea Market (Marcatino del Sabato) stretching along the Vassello seafront.

The colourful stalls of the Saturday's Market


In addition, Lerici is conveniently located close to other major city centers and cultural landmarks such as the old town of Sarzana. The Old Roman town of Luni is also a few minutes' drive from Lerici, and those interested can visit the famous marble quarries of Carrara.

Rooftops over town and the beautiful Bay

From the town's port, you can take a boat trip across the gulf to the Cinque Terre , as well as excursions along the west coast to Levanto, Deiva Marina, and Portofino.

The ferry service point on the seafront

The Venere Azzurra multi-purpose complex has two swimming pools (one of which is an Olympic facility) as well as facilities for tennis, golf and archery.

The tourist port of the town can berth up to 2000 boats .

Villa Marigola (Venere Azzurra) once hosted the Empress of Germany and today hosts many cultural events and is a sought after conference centre.

If you are driving to the area then we strongly suggest you check out our Parking and Traffic restrictions secton as well as the Travel Resources section for a wealth of information on getting to the area.

You will also find our  Useful Numbers and Services section helpful in providing essential information on the emergency numbers and other valuable services and facilities numbers available in this area of Golfo dei Poeti...


View Lerici in a larger map

Thank you for visiting Liguria Guide… we look forward to welcoming you to Liguria and hope you will love it as much as we do !

Beaches in the Gulf of Poets