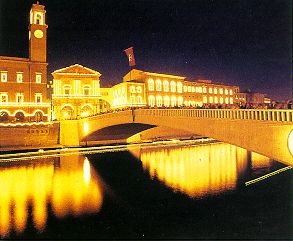 On the occasion of the Feast of San Ranieri, Patron Saint of Pisa, celebrated annually on 17 June, the enchantment of the illuminations of Saint Ranieri is renewed on the streets running along the river Arno (the so-called Lungarni).

In fact, following the ancient tradition the Pisans celebrate their Patron Saint on the following day. There are about seventy-thousand wax candles which at every edition are meticulously set in smooth and white glasses and fixed then onto wooden white-painted frames, modelled in such a way as to exalt the outline of the palaces, of the bridges, of the churches and of the towers reflecting the river.

Return to Jun 2010 Events on LiguriaGuide.com.