Apr - May 1, 2011 - Genoa, Palazzo Ducale - Exhibition : Mediterraneo. From Courbet to Monet and Matisse 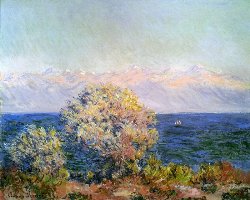 The exhibition displays eighty paintings from museums and collections throughout the world to explore this magical journey through colour, which Van Gogh described as “always changing – you don’t always know if it’s green or purple – you don’t always know if it’s blue – because a second later its changing reflection has taken on a pink or grey hue.”

Yet the French Mediterranean coast took a surprisingly long time to capture the imagination of painters in terms of the concept of landscape at the beginning of the nineteenth century, at precisely the moment in which Pierre- Henri de Valenciennes published his famous treaty on the depiction of nature.

Indeed, there was an enduring notion that the Mediterranean was closely associated with the ancient world and, above all, Roman civilisation. Consequently, painting was dominated by references to the Italian coasts, as the locations delegated for this return to antiquity. Gustave Courbet, who painted several of his masterpieces in the little fishing village of Palavas, south of Montpellier, made a fundamental contribution to initiating change, following the huge eighteenth-century paintings depicting the city and harbour of Toulon by Joseph Vernet, on loan from the Louvre, and those of Vaucluse by Hubert Robert, with which the exhibition opens.

The exhibition features at least a couple of these works by Courbet, which confirm the dramatic change of course that juxtaposes
man – or, indeed, his very absence – against the enormity of the sea. The works by Félix Ziem and
Émile Loubon, with paintings made around Marseilles, Antibes and Nice, can certainly also be attributed to this period of realism, as can those by Paul Guigou and Adolphe Monticelli of the socalled Marseilles school, which came to prominence in the mid-nineteenth century with its aim of depicting reality with the full force of a statement.

Return to Apr 2011 Events on LiguriaGuide.com.